A remarkable surviver from Hebden's past, which is in the safe-keeping of David Joy, is the 1855 rule book for the Hebden's "Star of Hope Lodge" of the Independent Order of Oddfellows, and it provides a valuable window into the social history of the village. It's a printed A format-sized booklet (110mm × 178mm), with a plain thin duck shell blue cover.

The Oddfellows was basically a fraternal cooperative society which provided its members with the safety net support that today is supposed to be provided by the welfare state. Each member paid a monthly subscription, and in return became entitled to sickness benefits, and had life insurance for himself and his wife. At the time, there were various Oddfellows organisations, and the Star of Hope was part of the Manchester Unity, which was the largest with over 250,000 members. It was open to men only, but there is an ambiguity about the membership qualification age. Rule 18 on page 8 of the booklet indicates that the qualification age was 21, but the subscriptions table on page 15 indicates it was 18.

Like the Freemasons, the Oddfellows is reputed to have its origins in the mediæval guilds; and like the Freemasons its governance involved secrecy, passwords, symbolism, rituals and regalia. Each lodge had its own name and badge, but they all included the same shield and motto. The motto, partly obscured on the Hebden badge, is "Amicitia Amor et Veritas", which translates as "Friendship, Love, and Truth" - the so-called triple link which is at the heart of the Oddfellows philosophy. The shield on the badge is quartered by a cross. In the top left of the shield is an hourglass, representing mortality; in the top right are crossed keys, signifying guardianship; in the bottom left is a beehive, indicating efficient industry; and in the bottom right is a lamb with a banner, denoting faith. Above the shield is a heart in hand, a symbol for charity, and surmounting all a representation of the "All Seeing Eye", a symbol also important in Freemasonry.

Despite all the rigmarole, the membership and benefits were open to all age-qualified men, and only those who were involved in the governance needed to immerse themselves into the hierarchical structure, the rituals, and the regalia. It will be seen from the document below that the officers of the lodge had bizarre names, such as "Noble Grand" and "Right Supporter to the Noble Grand".

The Craven Herald described one of their outings in July 1877 thus:

"The members of the Star of Hope Lodge of the Independent Order of Oddfellows spent a very pleasant day on Saturday last, having a walk and dinner. At 10 a.m. they left their lodge room, and walked in procession, headed by the Ilkley Brass Band to St. Wilfred's Church, where a most excellent sermon was preached by the Rev. C.H. Carlisle, rector of Burnsall. The rev. gentleman's address was highly eulogised by his hearers. On leaving church they returned to the Oddfellows' Arms, Hebden, where a most sumptuous dinner was awaiting them, provided by Mr. and Mrs. Worden, the host and hostess of the above place, and they were awarded great praise for the large display of culinary productions which were heartily enjoyed by the participants. Having duly satisfied the inner man and a few other indulgences,they walked in order to a place to be photographed, where Mr. Jennings, photographer, of Walker Hill, Skipton, was successful in grouping a very good negative of the Oddfellows, including the bandsmen and a number of others. Having satisfied the photographer, they walked in procession through the village. The band is worthy of a mark of praise; their appearance and conduct was most creditable, and their playing received well-merited approbation. The Star of Hope Lodge is bidding fair to be one of the best friendly societies in Wharfedale. They number 85 members, with only a few aged members, and have also an accumulated capital of over £700."

Despite all this, the Oddfellows was essentially a self-help organisation in which the members provided mutual support. For example, for the payment of 7s 6d a year, a 35-year old member would be able to claim 9s a week sick pay for up to a year, and on his death his widow would receive £7.

The Star of Hope Lodge was established in 1851, and they held their very formal meetings in what was called the New Inn. As in many places elsewhere, such were the benefits to the public house that it changed its name to the Oddfellow Inn. It later became The Clarendon.

It would be difficult to overstate the importance of the lodge to the community. In 1856 it had 65 members, and by 1880, most households in the township were probably protected, with a membership of 90 when the township had only about 95 men eligible. Burnsall, Appletreewick and Grassington all had their own successful lodges, so it is unlikely that there were many members from outside the township. At the time the lodge had assets of £780, or the equivalent of almost £16,000 at today's values. However, it would seem from the Craven Almanac that the lodge was disbanded in about 1894. 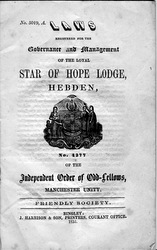 Title page of the rule book for Hebden's Star of Hope Lodge of Independent Order of Odd-fellows, Manchester Unity 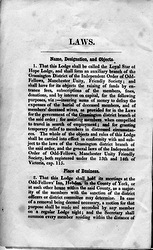 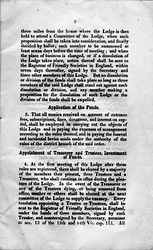 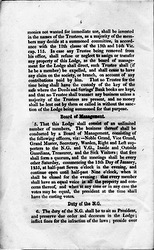 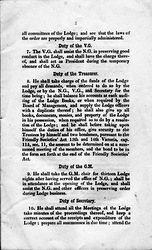 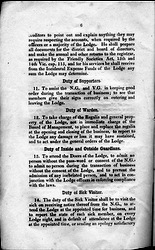 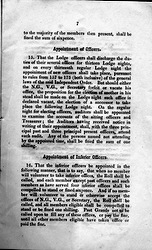 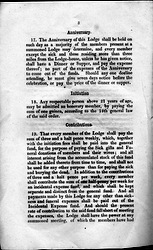 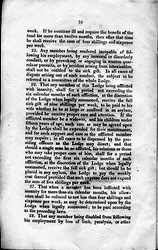 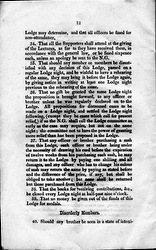 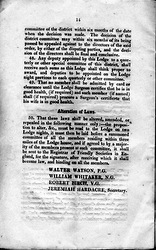 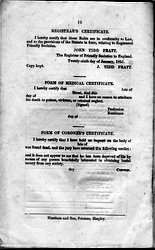 Page of the rule book for Hebden's Star of Hope Lodge

Walter Watson was the Past Grand, which meant that he had been the previous Noble Grand, or Chairman of the Lodge. His job was to support the Noble Grand and the lodge in every possible way.

Watson was 32 years old at the time. In 1851 he was a cotton warper working at Hebden Mill, living in Mill House. His father was the manager of the mill, so Mill House was probably what we know as Dene Crest today. He married Isabella Stackhouse in 1857, the daughter of a lead miner, by which time he was the manager of the mill, so presumable his father had died in the interim. He was still the manager in 1871, but in 1881 he was a wool carder in Bingley, so he seems to have had a change in fortune. He died in Burnley in 1897, and was buried in Linton.

William Whitaker was the Noble Grand, which meant he was serving as the Chairman of the Lodge.

Whitaker was the son of a Hebden lead miner, and he was 23 years old at the time. In 1861 he was living at Scar Top making a living from a 3½ acre farm, and from lead mining. He had married Martha Wensley, daughter of Robert Wensley the village blacksmith, in 1853.

Robert Birch was the Vice Grand, which meant he was serving as the Vice-Chairman of the Lodge.

Born in 1829, Birch spent much of his working life as a miner, but after the mines closed he became a farmer / grazier. He never married, and lived with his mother until she died in 1893. He died in 1903. Both he and his mother are commemorated on a headstone in the church graveyard that is still standing.

Hardacre was born in 1830, the son of Thomas Hardacre, a Hebden farmer. In 1851 he was a farm labourer, but when he married Mary Anne Joy, daughter of Thomas Joy, in 1858, he called himself a farmer. About that time he moved to a 430 acre farm in Bordley where he stayed until his death in 1896. He was buried in Rylstone.