Field barns have been a characteristic feature of the Dales countryside for over 300 years. The date that most of them were built is unknown, but the main building period of the ones we see in the southern Dales was the late seventeenth and early eighteenth century. They were an integral part of an agricultural cycle whereby the cattle spent the year close to where they grazed, which only started to die out in the last forty years. The hay from the meadows would be stored in the barns, where the cattle spent the winter months, and the muck accumulated during the winter would be used to fertilise the meadows.

The barns were made with stone, with the roof usually flagged. In Wharfedale they often have large double-doors to allow hay carts to be backed in, sometimes at the back of a large porch area, with two or three smaller entrances allowing ready access to parts of the interior. Large holes in the walls gave access to the roof space. They often had extensions added, known as outshuts, including calf hulls for wintering calves, and kennels.

The interior of the barns tend to follow a pattern - presumably the result of many generations of trial and error. Their features often have names originating from the Norse and Danish settlers from the first millennium, which can vary according to the area. The cows are held in the shippon, in stalls separated by timbered or large flagstone partitions called boskins. Each stall, known as a boose (or bose, buse) held two animals separated by a wooden post. The booses are cobbled, except for a row of flags along the front and back, known as settlestones. The ones at the back act as a curb, separating the boose from the area behind it. The front ones, however, are to make life more comfortable for the animals. When cows lie down, they drop into a kneeling position first, and the flags are easier on the knees than cobbles. The cows are tethered using a thin chain, a cowband, to a ring, known as a redwiddie, which can slide up and down a post called a rudstake (or rudster), fastened into the ground. The front of the boose, the skelbuse, was made of slatted wood. In front of the skelbuse was the fodder gang, a passage area used when feeding the stock. When in use, bedding is laid on the floor of the booses - originally bracken, but later straw as transport improved. At the rear of the stalls a channel known as a group received the muck. This was accessed along the back walk, from the shippon door. The muck was forked through a muck 'ole in the gable end of the lathe into an outside midden.

Each cow required an enormous amount of hay, typically over a couple of tons, as well as bedding to see them through the winter, and much of the barn space was used for its storage. The area not used to house the cows, known as the mew (sometimes called the mewstead when not in use) was the main storage area, but the roof-space above the booses, known as balks (or baux), was also used. The mew was at first filled from hay delivered through the door, but when the stack became too high it was loaded through forking 'oles in the wall. The hay was prevented from overheating by ventilation supplied through the forking holes, slits, and small holes in the stone work.

Skuff Barn still retains a number of the features described above. It also has the remains of a watering system, probably installed in the 1950s, which allowed stock to access water in their bose by pressing a lever with their muzzle.

Robert Chapman commented when he saw the photographs: "I have been in many in my 70 years, and run the gauntlet as you mucked out the cows. You often got the shovel kicked out of your hands, or received a nice dead leg from a nervous beast. I gave up using a brush - they hated it. I always looked forward to the warmth after I had trudged through deep snow to get there on a wild wet windy day. With most out-barns, you had to let the cows out for water once a day - then the fun began tying them back up."

For the following photographs click an image for a larger version and explanatory test. 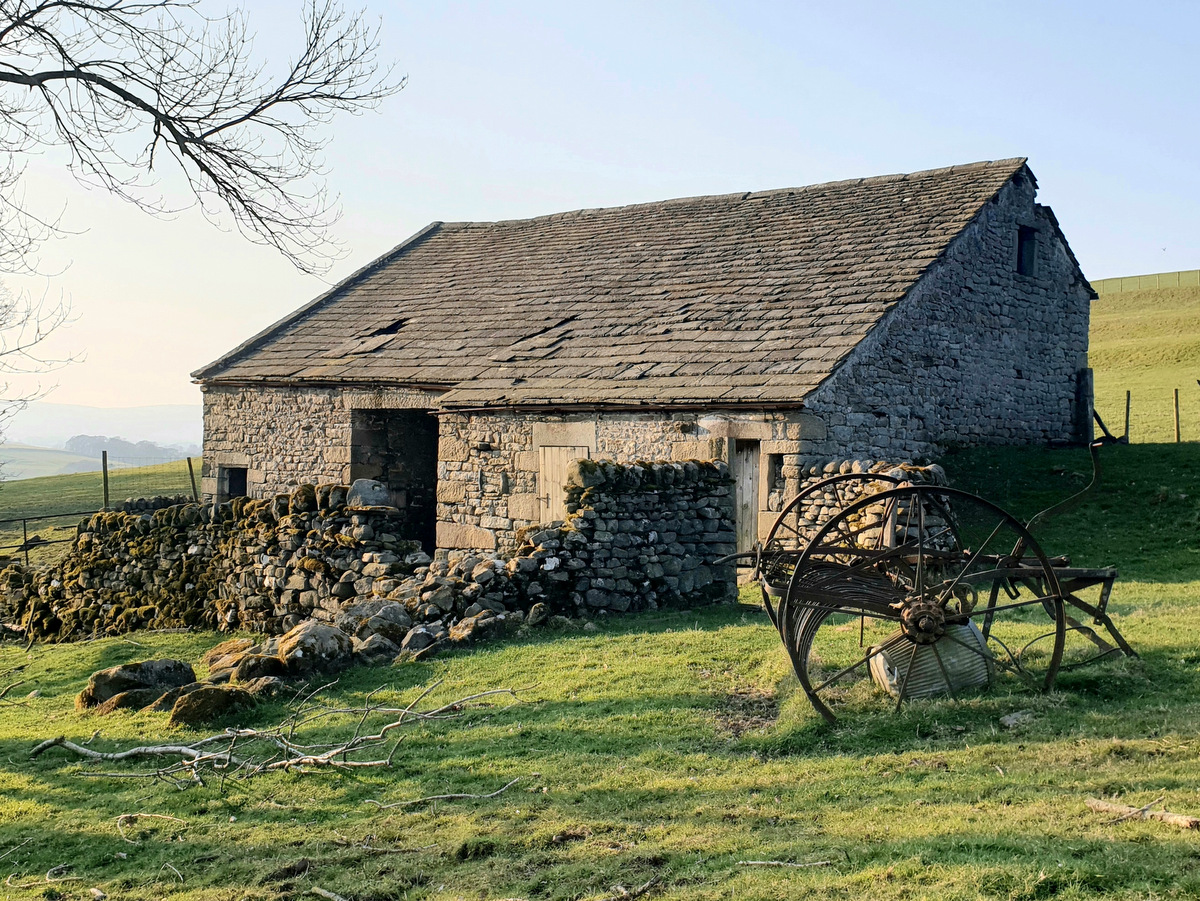 Scuff Lathe showing the main door with porch, two shippon doors at either end, and a forking hole in the gable end. 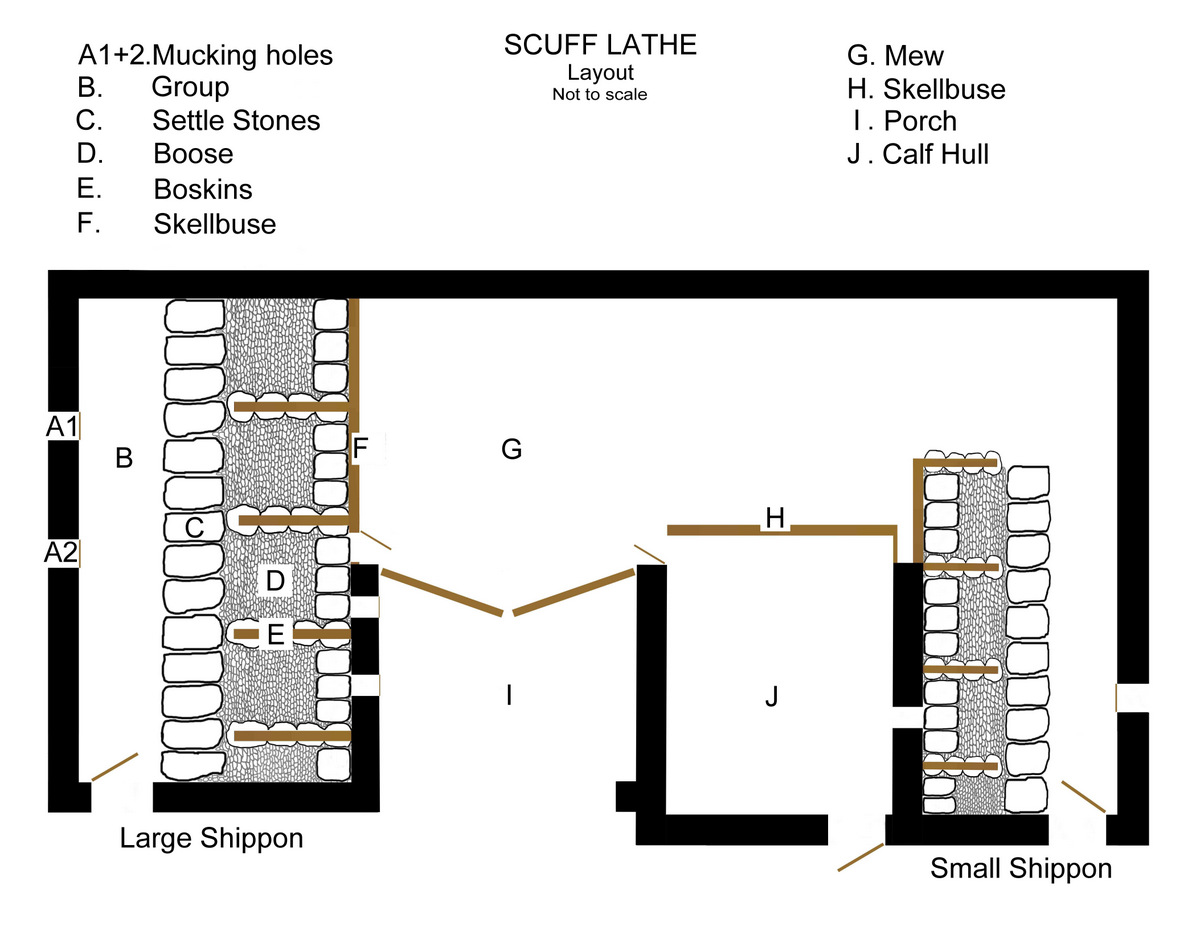 A floor plan of Scuff Lathe, drawn by Chris Foster. May 2022 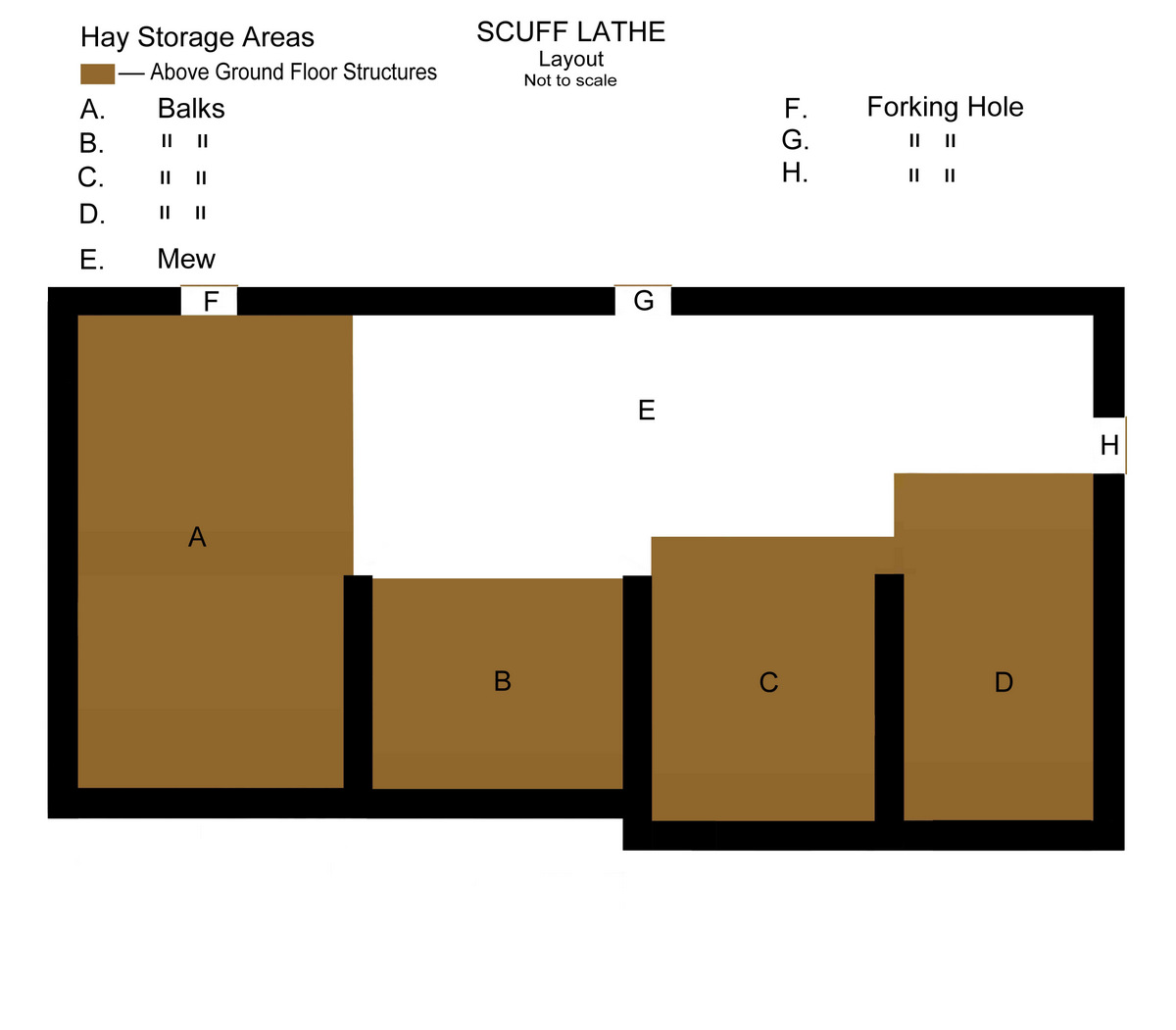 A plan of the hay and bedding storage areas in Scuff Lathe, drawn by Chris Foster. May 2022 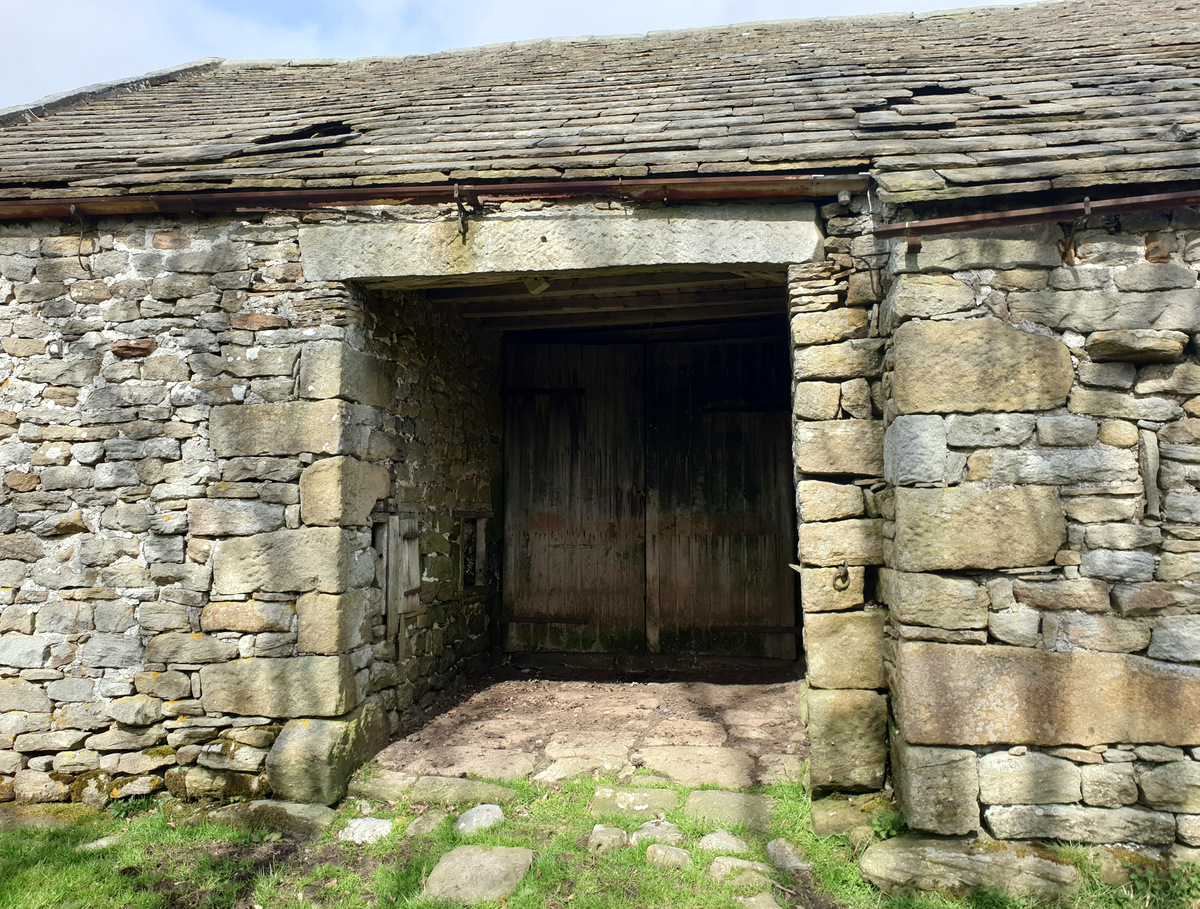 The main doorway into Scuff Lathe. It was large enough to back a hay wagon into to allow unloading into the mew. The large porch was often used to garage the wagon. 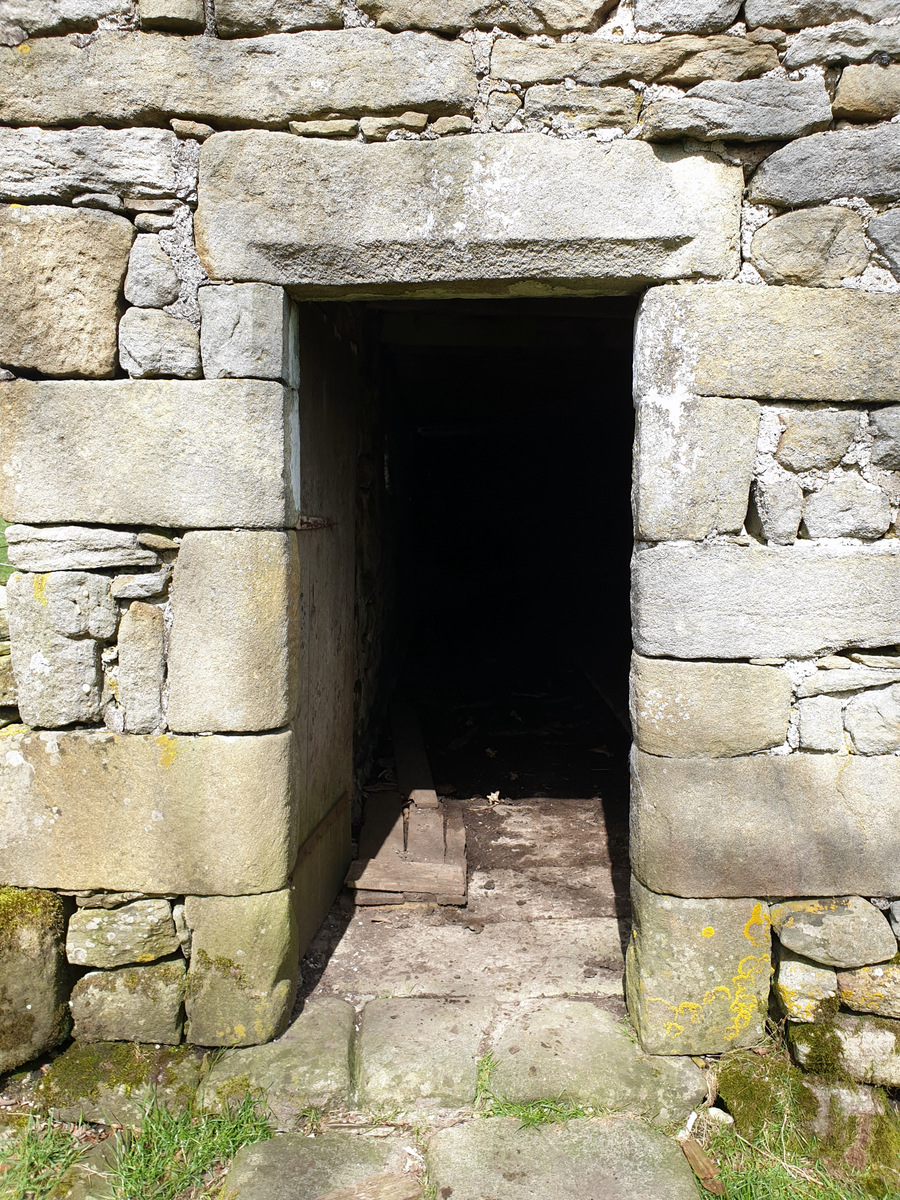 The fine stonework around the large shippon door. 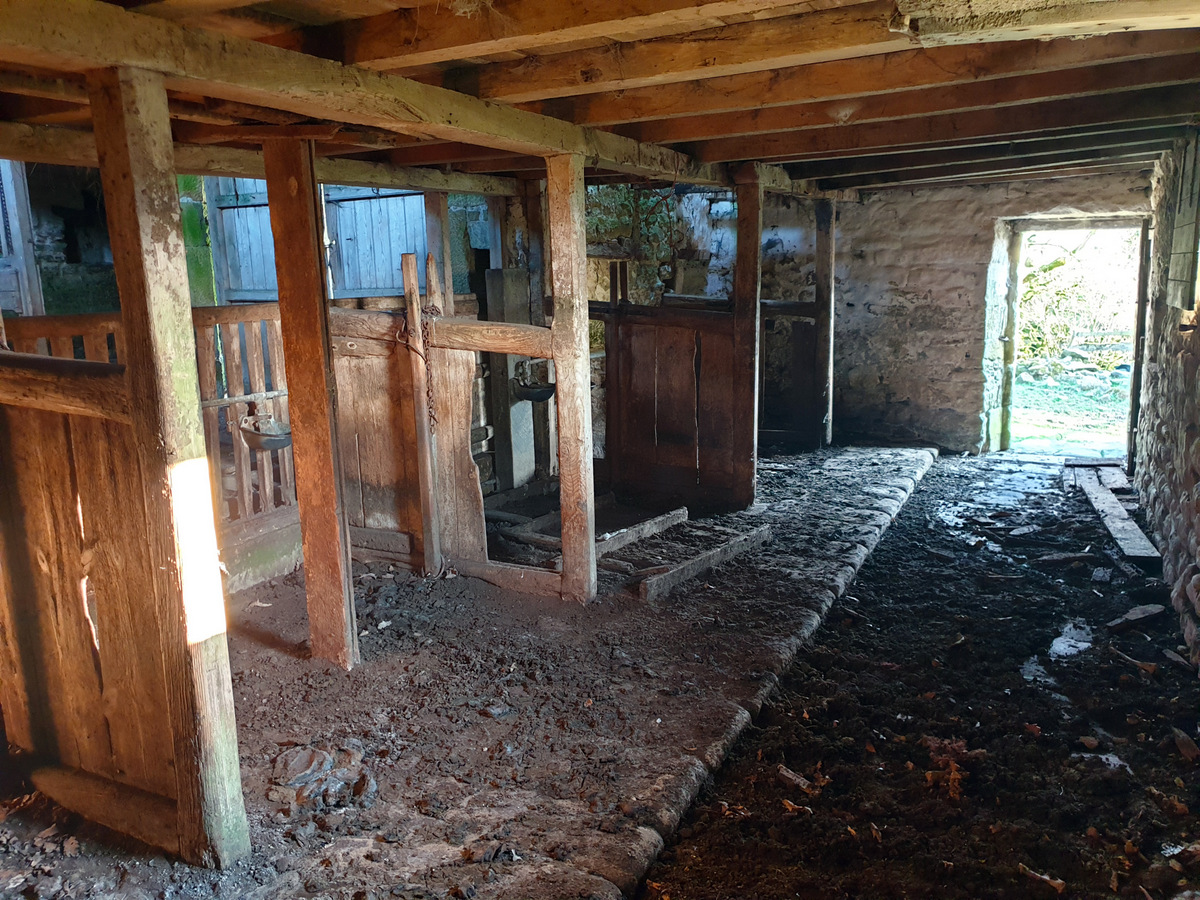 The back of the large shippon with 3 booses, with their cobbled floor, flagged settlestones and a rudster with its redwiddie at its base for securing the cows. Behind the settlestones the group received the muck which was forked through a muck 'ole into an outside midden. 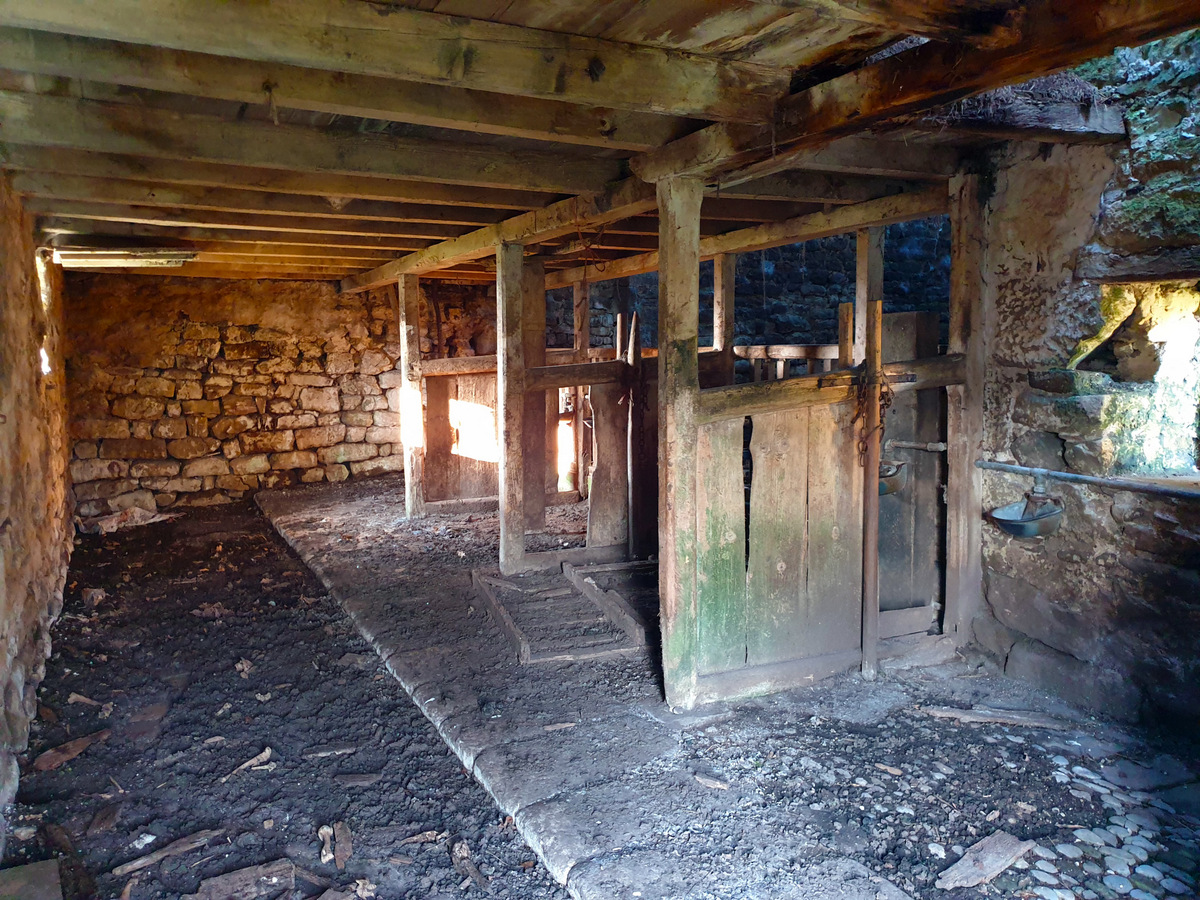 The back of the large shippon showing the group, into which the muck fell, behind the settlestones. The area above the wooden ceiling was a balk used for storing hay and bedding. 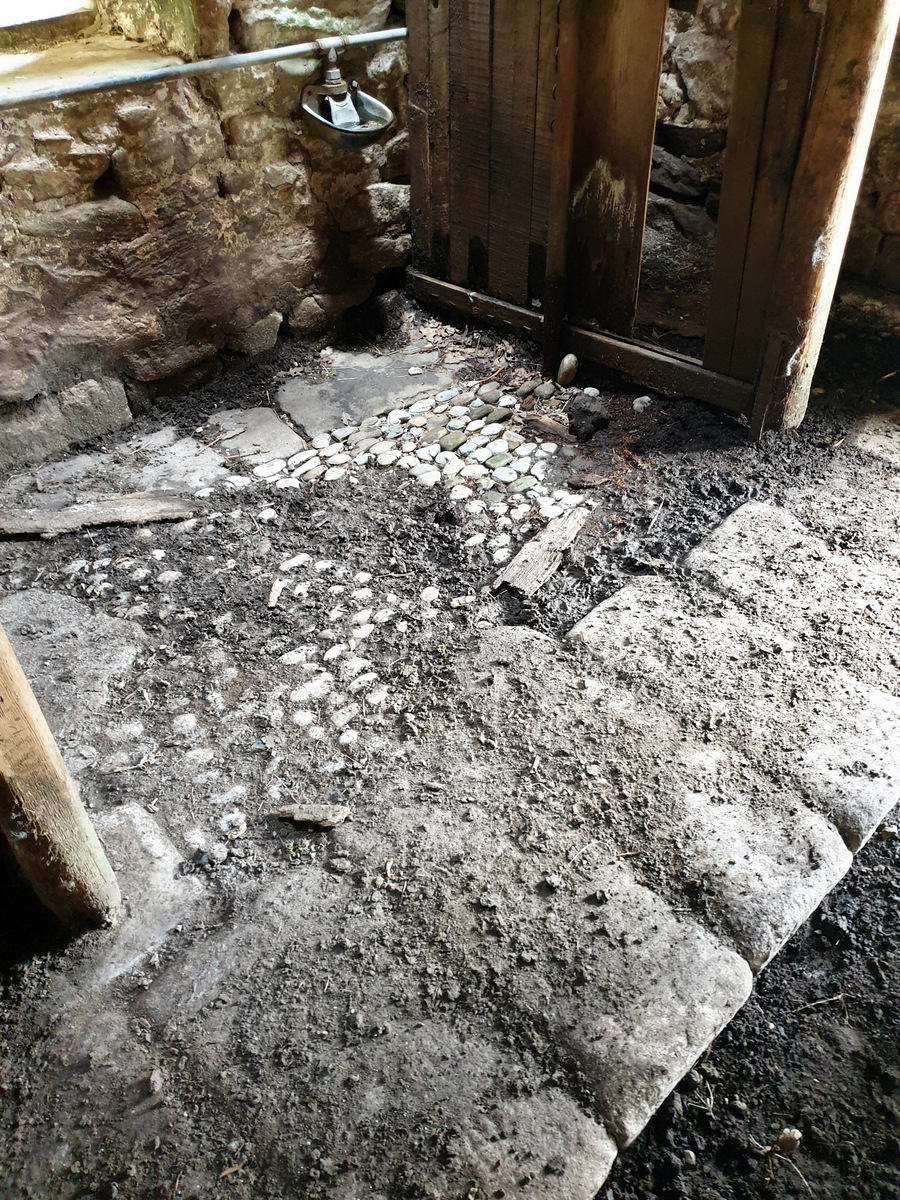 Detail of a boose, showing the cobbled area in the centre and the settlestones at the front and back, which is raised from the passage behind. A nose pump water bowl is in the corner. 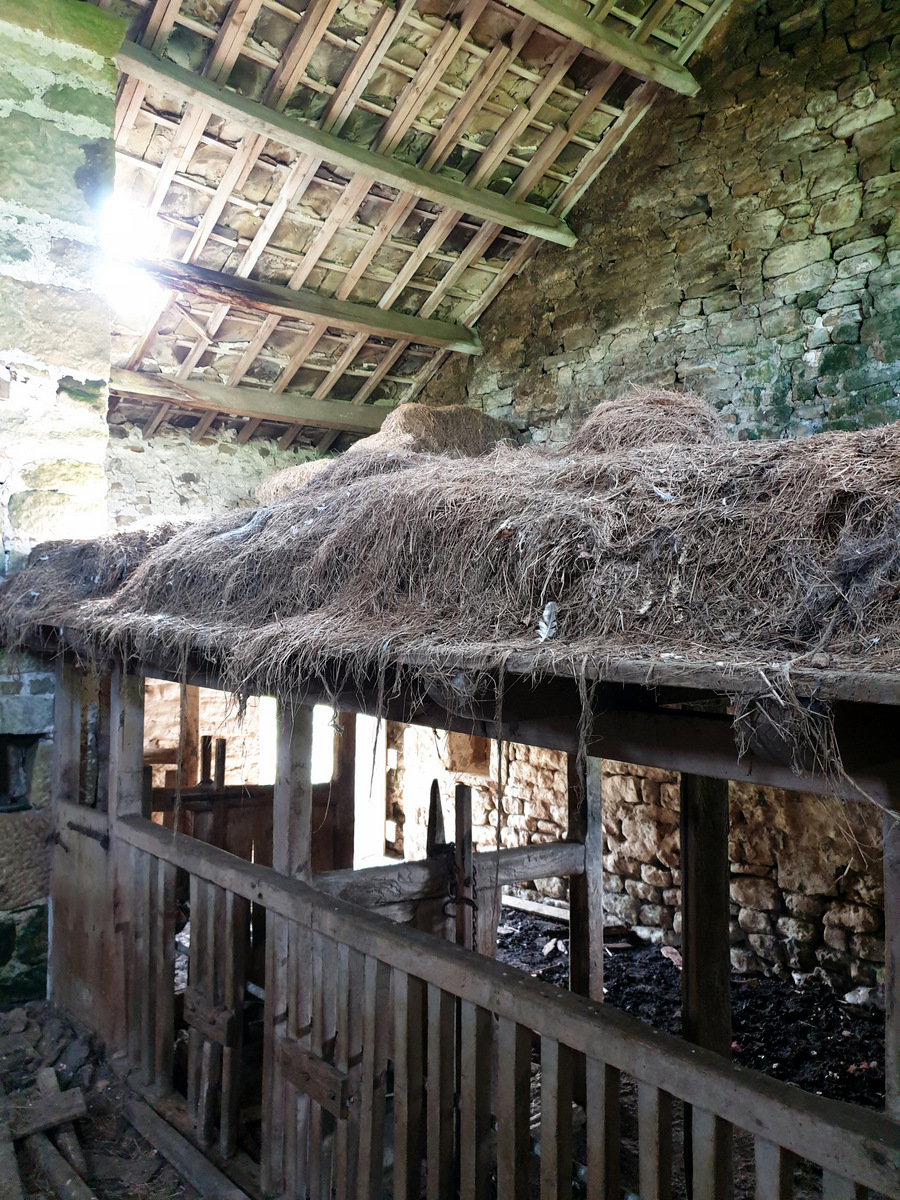 The baulk used for storing hay above the large shippon. 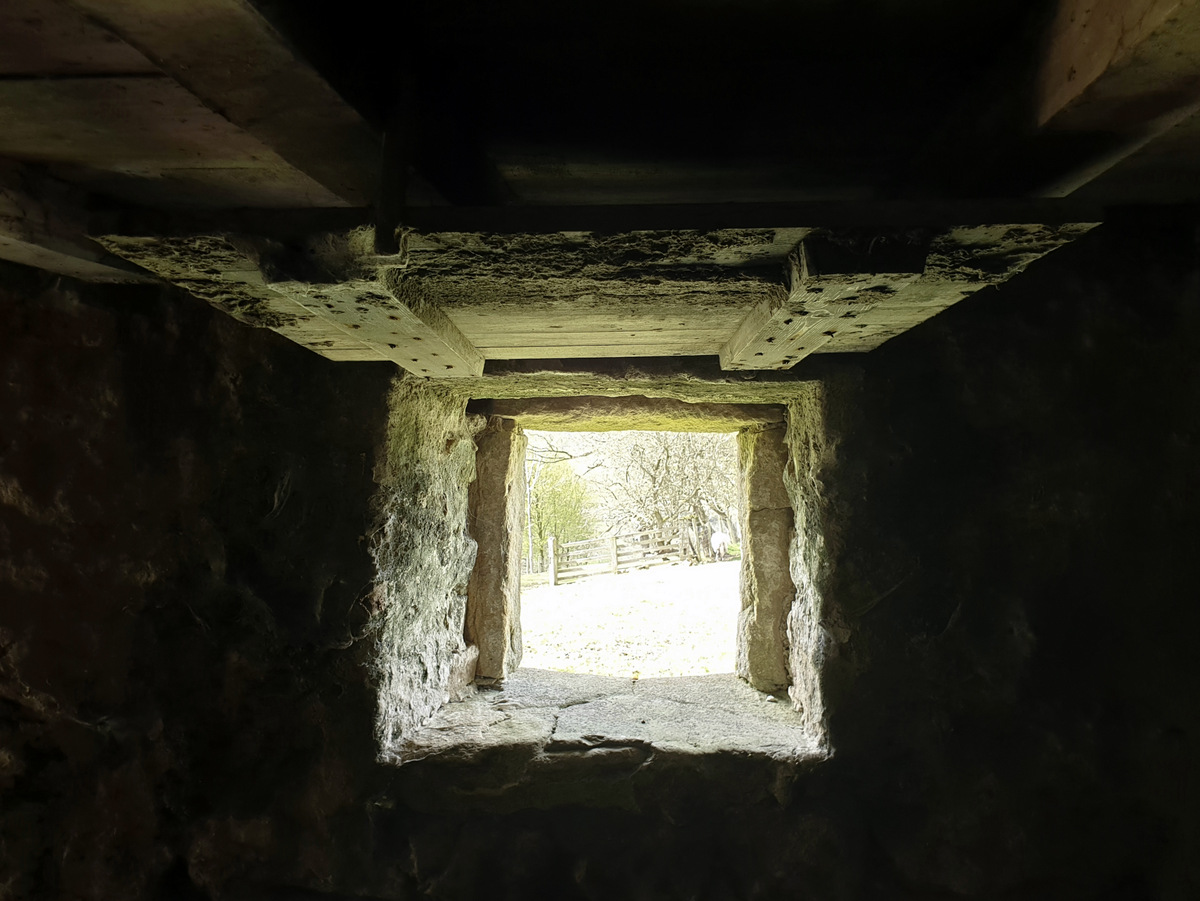 A muck 'ole behind the large shippon. This allowed muck to be forked from the group directly through to the outside midden. 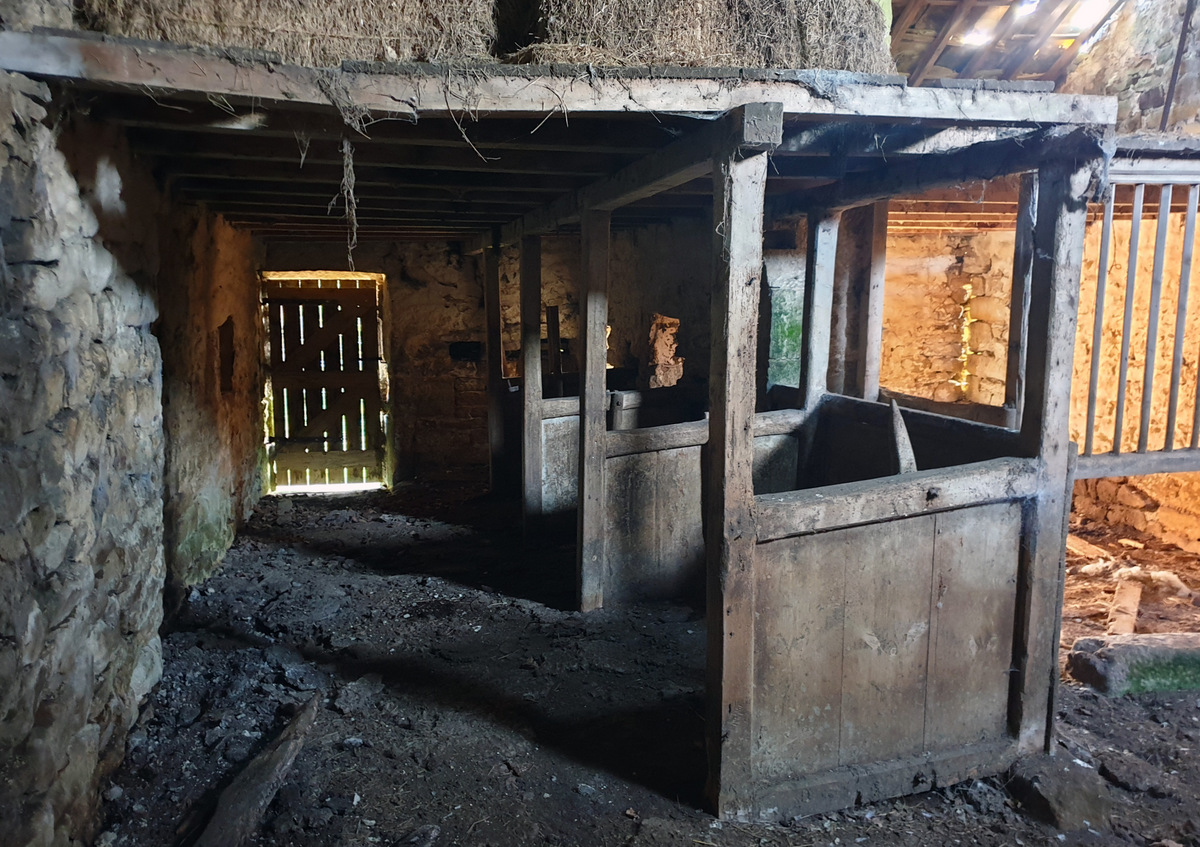 The small shippon, was almost identical to the larger shippon, but was used for young cows or bullocks (stirks) aged between 12 and 18 months. 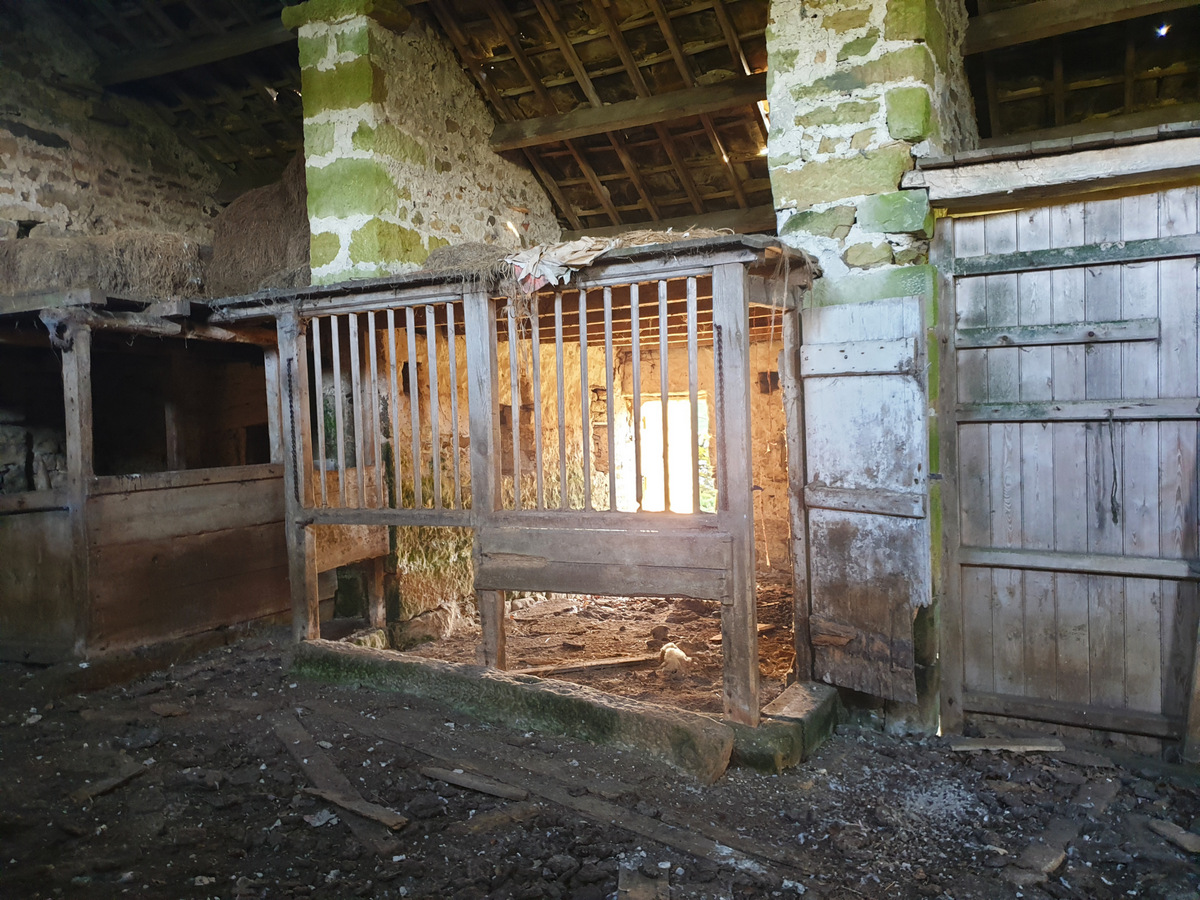 Shows an enclosed area probably used to house young calves (calf hull). The calves wouldn't be tethered, but allowed free rein within this area. The large wooden structure is called a skell boose. This separated the cattle from the mew, which contained the hay. The calf hull has its own outside door. Above is a baulk used for storing hay or bedding. 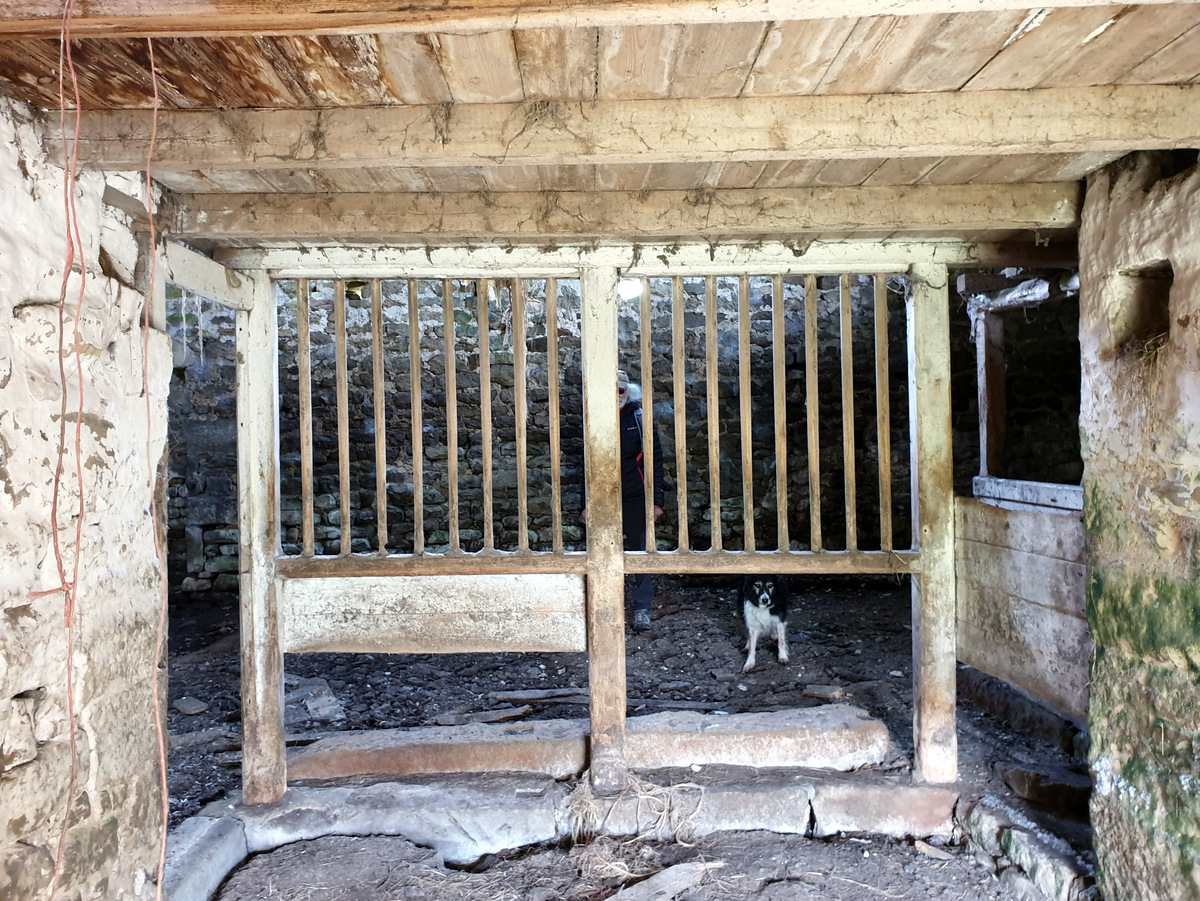 Looking out of the calf hull into the mew, through the skell boose which is embedded in settlestones. The lower section could be raised and lowered by a chain. An access door from the mew is on the left. A small inset in the wall on the top right was used for storing small items. Above the ceiling was a baulk used for storing hay or bedding. 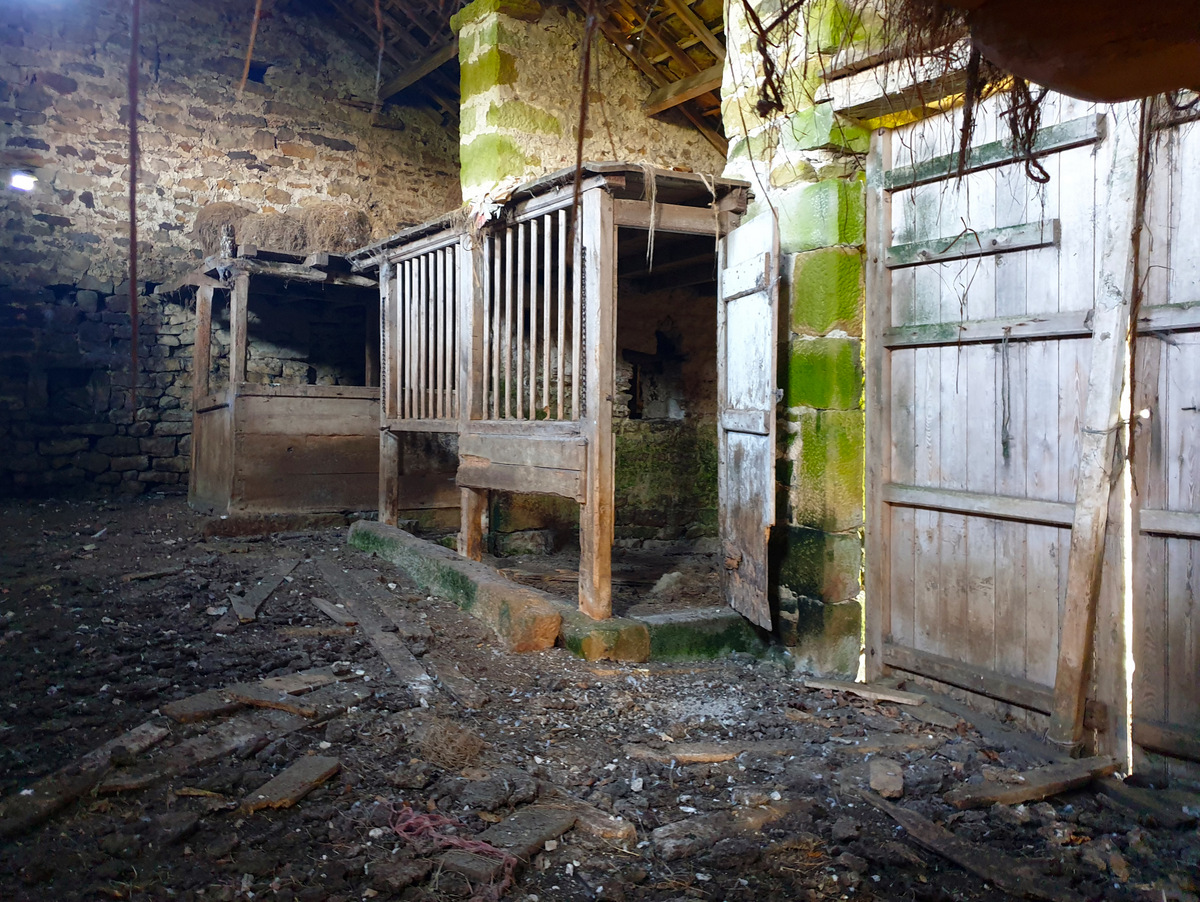 This photo shows the interior double barn doors, the large skell boose (centre) and the smaller shippon in the background. The main access to the lathe was through the double doors, which when opened gave access to the porch, and another set of doors on the exterior wall. The porch would be used to house a cart, keeping it out of the elements during the winter months. During hay time a hay cart would reversed in to lathe to offload the hay into the large open area of the barn called the mew. 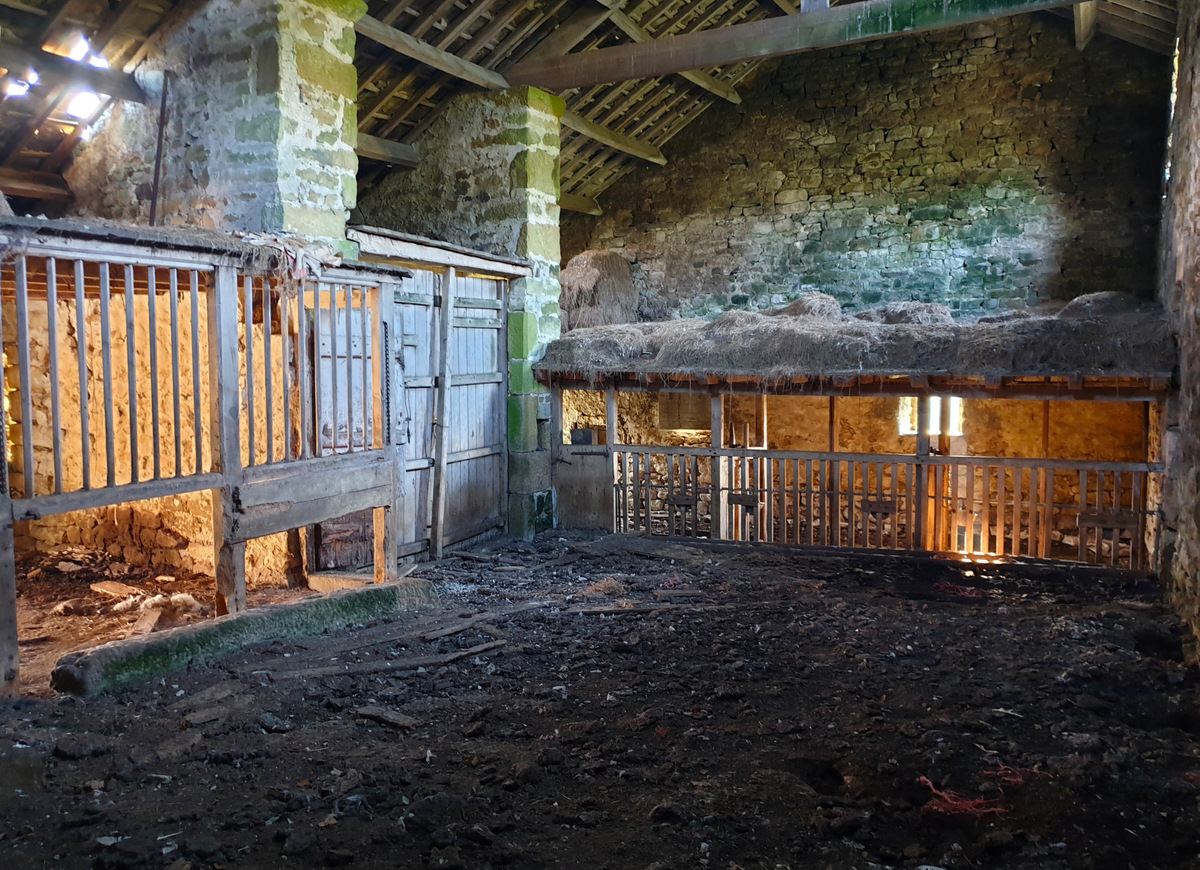 Shows the mew, with the large shippon in the background, and the interior barn doors and calf hull on the left. Note the sectioned areas above the large shippon and porch. These would be filled with hay along with the mew, utilising every bit of space to store winter feed, which would fill a barn to the rafters. 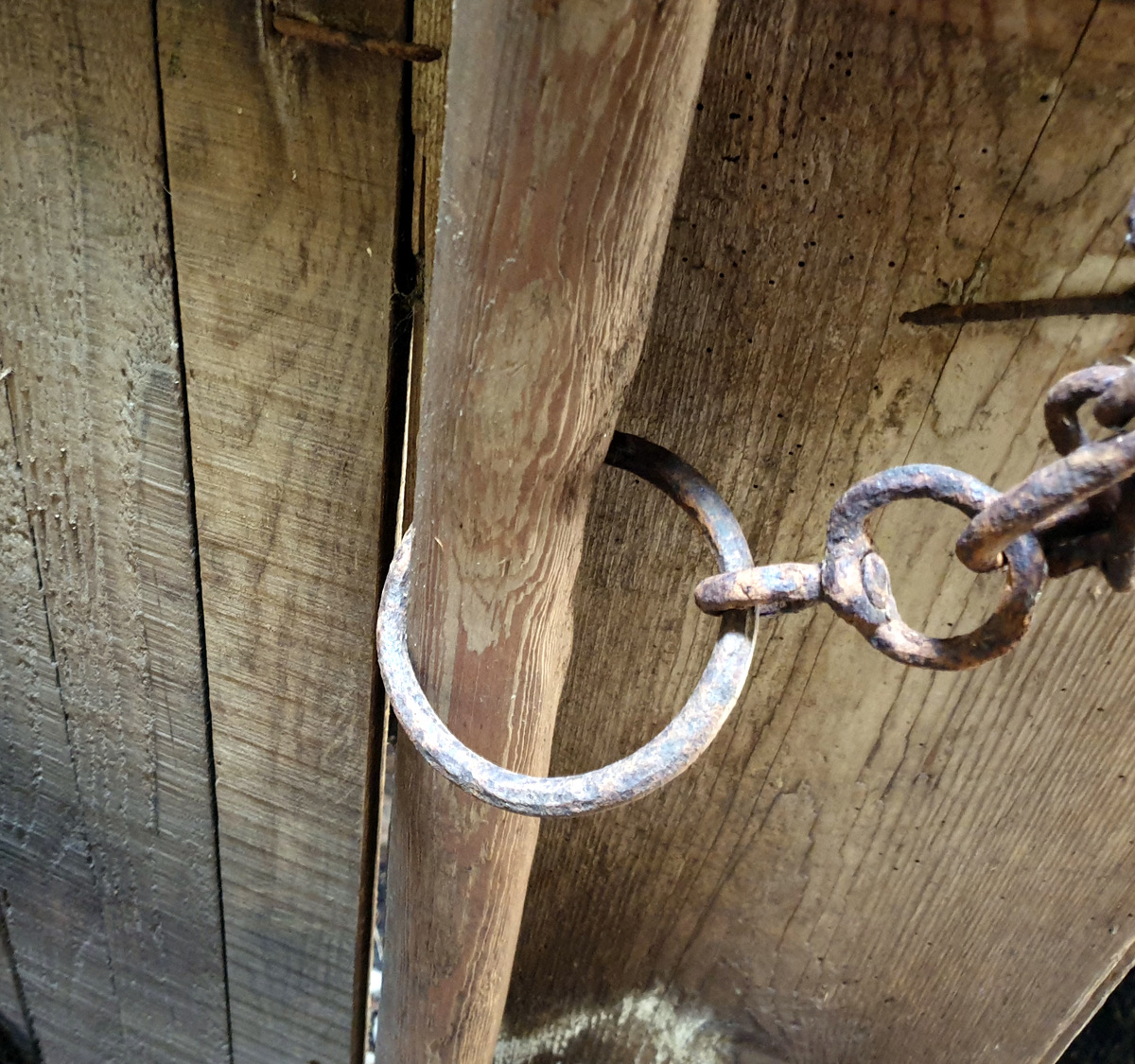 The rudstake was firmly fixed into the ground, and the cow was tethered to the redwiddie with a thin rotating chain. The redwiddie slid freely up and down the post, allowing the cow to lie down without hindrance. 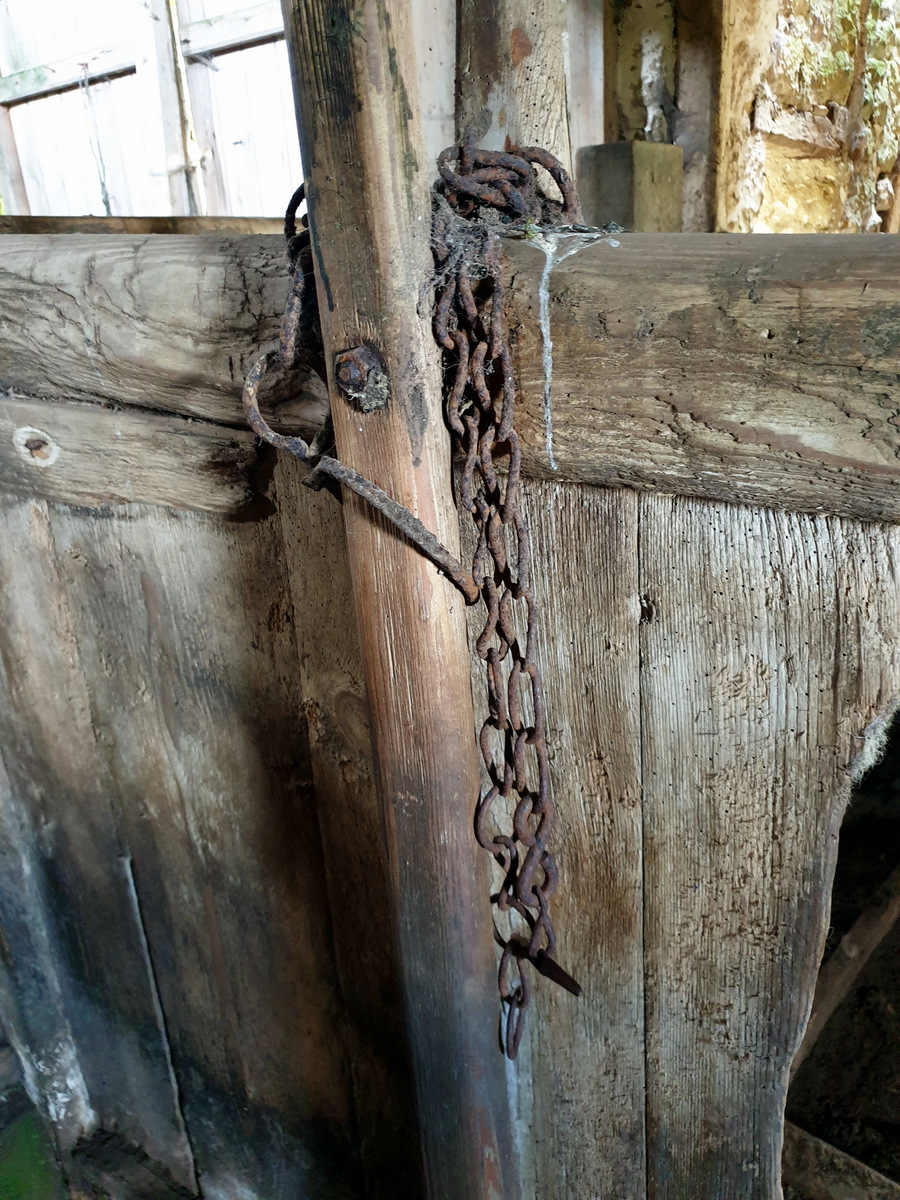 These chains are those which tethered the cows to to the rudstake, and are known as cowbands. The end is taken round the neck and fastened back using a T-shaped toggle. They may often now be found securing field gates. 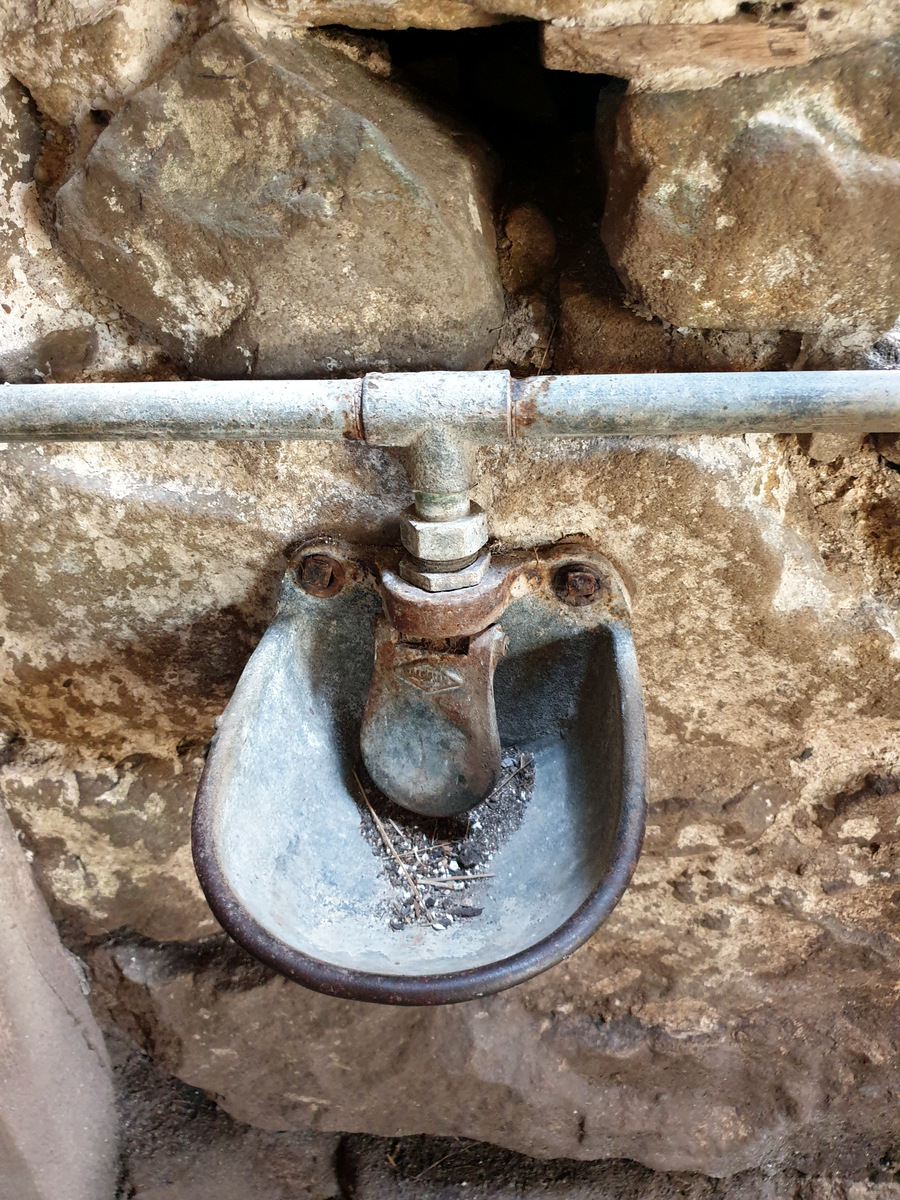 A nose pump water bowl in a boose. Probably installed in the 1950s, the cow pressed its muzzle against the plate to fill the bowl with water. 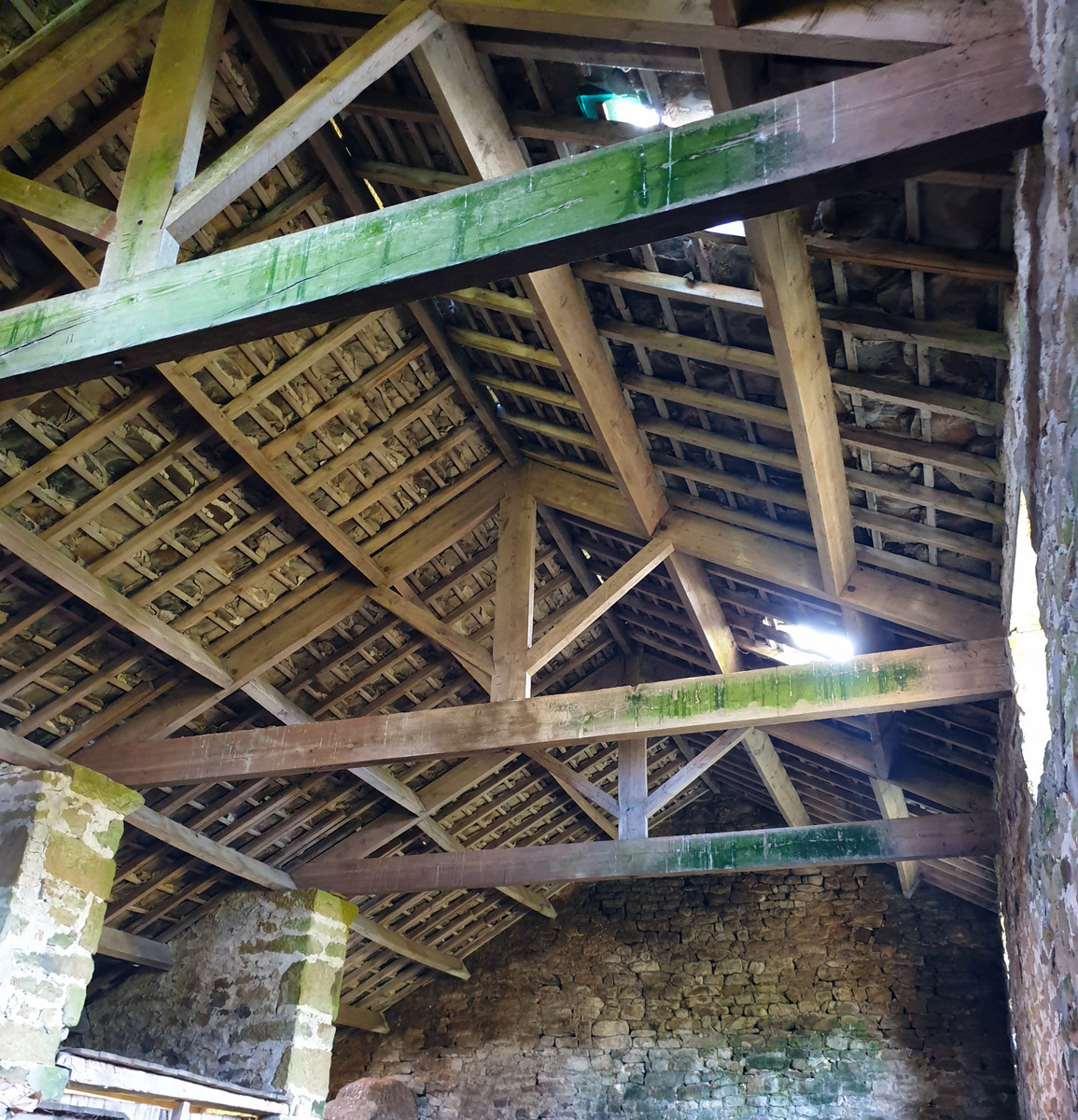 The barn roof. The timbers would be made from oak with the A-frames pegged together with oak dowels. Traditionally hand cut and adzed into shape, these have been machine cut, indicating that it was re-roofed in the 20th century.

The following is a record of the stone barns (lathes) to be found in the Hebden township. In the main only field barns have been included, but there are exceptions. It is based on those marked on the 1846 tithe map, together with later builds. Map evidence has been used to identify the approximate date of the latter. Others may have been built and demolished before the tithe map was made. The only barn that seems to have been built as a result of the 1857 Enclosures is a small barn on Tinker's Lane (B30 in the list below). The current status of the barns is recorded in the register below: some have been demolished or fallen into ruin, some have been converted to housing, but many are still standing. Again, an attempt has been made to establish the date of demolition or conversion. Below is a Google Earth image shewing the location of the barns listed. You may download the original kmz file which marks their locations.